In 2001, the VRR acquired salvage rights to the track in New London’s Fort Yard as it was being dismantled. FVRR volunteers assisted and asked about the remaining railcars in the yard, now cut off from active track. Other preservation groups had tried to acquire the cars and were not successful and they were now destined to be scrapped. Former NH 40-foot boxcars were becoming quite scarce so it was decided to try and save one of them.

Getting the boxcar out of the yard was quite a challenge as it required a large crane close to active Amtrak right of way and a special double drop trailer to take it out via the highway. Once safely back in Essex, the car was put back together mechanically and eventually sandblasted, painted and lettered in the NH script as it was when it was new. One of the other boxcars when to Danbury, but the remaining cars were unfortunately scrapped. 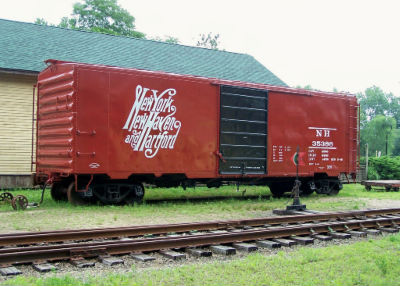