While she wears “New Haven” lettering and the number “3025,” this locomotive was actually built in 1989 by the Tangshan Locomotive and Rolling Stock Works in China as an SY-type locomotive for the Knox & Kane railroad of Pennslyvania. After the K&K fell on hard times (including an engine house fire), the locomotive was sold at auction and acquired by the Valley Railroad to be the third in their stable of operational locomotives.

Requiring much mechanical and cosmetic work by Valley Railroad shop forces and numerous volunteers from the Friends (including a newly fabricated New Haven–style cab), “3025” rolled out of the shop in late 2011 as a “New Haven” J1a Mikado, with authentic NH headlight, bell, whistle. 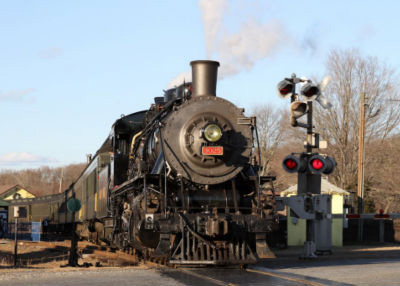